The Passing of My Father, and a Eulogy 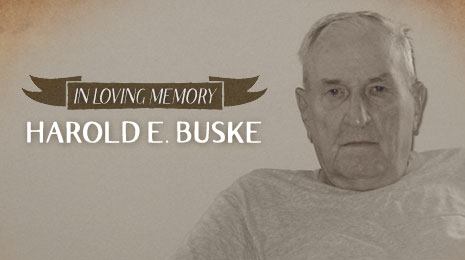 I’d just pulled into the parking lot beside the Edward Jones Dome in downtown St. Louis when I saw that my sister Debbie had called. I tried to listen to her voicemail but was denied by a password error; I’d had the new phone just a couple of weeks and had been having trouble accessing my messages. So I paid the parking attendant ten bucks, then called my sister back.

“Dad’s bottoming out,” she said, voice cracking with emotion. “The doctor said to call in the family. Get here as soon as you can.” I leaned against my car, trying not to cry, and failing.

Looking through my car windows, I could see the backend packed with my convention exhibition gear — banner stands, rolling cart, boxes of comic books, prints and promo cards. I had been minutes away from rolling my stuff into Wizard World St. Louis Comic-Con’s artist alley to set up my table. To spend the weekend pitching my comics to attendees, and talking about Nerd For A Living. Instead, I got back in the car and immediately headed an hour north, to my hometown’s hospital, where my father had been moved into the ICU.

I had been at the hospital with my father the day before. He’d been running a fever, off and on, the sign of some infection which the doctors were never able to identify. (I’m told this is common with the elderly.)

Despite his advanced age, and a persistent kidney problem, Dad had been pretty healthy. He lived in an assisted care facility, like a dorm for old people, each with a nice little apartment, plus common rooms and dining hall for social gathering. He loved it there, had his privacy but also support and friends.

He still got around pretty well, rarely using his cane, up until just a few weeks before his death. Then, though, he’d started to slow down, feel sluggish, spent more time in bed. Wednesday, this mysterious malady had gripped him, causing pain and chills. He resisted going to the ER, against the wishes of two of my other siblings who lived close to him and shouldered his care and transport. But as the fever worsened, dad relented and was admitted to the hospital late Wednesday night.

I spent Thursday afternoon in his standard-issue hospital room, by his side with one of my brothers and two of my sisters. He wasn’t hooked up to all the gadgetry I’ve come to expect, though — no monitors, no fluids flowing from pumps into his veins. Just a bed and an untouched tray of hospital food. A nurse dropped in occasionally. A small group of vaguely defined hospital staff came in to talk a lot, without seeming to know what was actually going on.

Dad could communicate, but was fuzzy from the fever. Late in the afternoon, while my brother Ed and I chatted quietly nearby, Dad finally slept a solid two hours. He woke refreshed and feverless, suddenly 100% his usual self. He smiled and chatted with me as best he could (he was deaf in one ear and nearly so in the other), thanked me for being there. Relieved, I hugged him and got ready to head home. “This might be the last time I see you,” he said, but he was smiling. I told him that was absolutely not the case.

I told my siblings about the convention the next day, that it could be hard to contact me once I was in the Dome. But, if anything changed, got worse, to call me and I’d be on my way. We felt like things were going better, hoped it would remain a simple hospital stay. But that evening, as I threw together my gear for the show, I fretted over whether to bother, if I should just cancel and head back to the hospital. But Dad had told me to go, to do my thing.

By Friday evening, the word had been spread, and Dad’s children and stepchildren had hastily traveled to gather at his side. Along with their children, grand children and a few spouses, we commandeered a lot of space in the intensive care unit. Fortunately, this was the quietest, least occupied hospital I’ve ever been in, and Dad had the ICU to himself. He slipped in and out of consciousness, but greeted each of us, held our hands. He told us that, though he was terribly afraid of death, he was ready to go. That he was tired and had endured enough, that he did not want to be sustained.

We were called upon, as a family, to make the decision you never want to face. The same one we made for my mother, seven years earlier. To deny resusistation, to end any treatments that didn’t simply remove the pain and ease the suffering. We gave our instructions to the nurse, and hung our heads. The nurse conferred with Dad, and he confirmed the decision. They transitioned to “comfort care”, and told us it was now just a waiting game. “Could be hours, could be days,” they said, with that apologetic shrug every nurse has in this situation.

It would be almost precisely a day, as it turned out. But the actual moment came rather suddenly. Dad’s body stubbornly clung to life for 24 hours, heart rate hovering just above 100 bpm, oxygen holding steady. Several members of the family were in the room with him when the monitor’s numbers lurched. Dad’s breath halted, then resumed for four quick inhales, and then he was gone.

I’d been standing outside the hospital, getting some fresh air with my sister Julie and two of my nephews. We got frantic calls, telling us to come quick. We ran through the hospital corridors, but arrived too late, found him still and silent and peaceful. We clung to each other and wept, and kissed Dad goodbye.

The following Wednesday, May 27th, on a beautiful, sun-drenched afternoon, Dad received full military funeral ceremony at Camp Butler National Cemetary in Springfield, IL. The United States Army saluted their comrade with words and ritual, the mournful melody of TAPS, and three volleys of gunfire.

Beforehand, we held a small visitation, gathering family and friends, and members of the community. Dad’s casket, a lovely shade of blue close to the color of his eyes, sat draped with the flag. Beside it, a photo of Dad with my mother, and the small urn of her ashes, which we would later nestle into the crook of his arm before the casket was closed and locked.

My sister Cathy and I delivered eulogies to the collected generations of our family. This was mine:

This past Saturday, May 23rd, my father, Harold Buske, passed away at St. Francis hospital. Dad was 92 years old — a very good run, I think we can all agree.

He spent his last few days surrounded by loved ones, including almost all of his 15 children and stepchildren, plus many grand children and great grand children. He was never alone, always one or two of us by his side, holding his hand, telling him how much we loved him. A few of us hovering nearby in the cramped ICU room. A dozen more in the waiting room, or roaming the halls, cycling in for a few last moments with the man who has been so important to generations of our family.

Dad was only intermittently lucid and conscious, but he acknowledged each of us, looked into our eyes. He told us that he loved us, that he was happy we were there. Smiled with delight when the younger children came to see him.

Even as his body shut down and painkillers eased his way, Dad’s powerful heart hammered along until Saturday afternoon, when he pulled a few last breaths and then passed quietly.

My father lived a long, complex life spanning time periods we only know as history now — growing up in the Great Depression, fighting two tours in World War II, riding a desk through the Korean War. He was decorated with the Bronze Star and Purple Heart. He danced in the streets of Italy, romanced in Switzerland, knew combat in the theaters of Europe. Walked arm-in-arm with the famed Andrews Sisters, singing into the night. And returned to raise a small army of his own.

On the home front, he fought to keep his family together through lean times and hard times, across decades and against unreasonable challenges, blending two families in difficult circumstances, and even fathering a late-in-life child—me—in his mid-fifties.

Before and after the military, he worked a number of different professions — each seeming to inflict a unique physical toll that he’d carry throughout his life. But Dad was a relentless worker, and poor at staying idle. After retirement he continued to take on odd jobs and projects, whatever kept him busy and moving. Robustly physical well into his 80s, my father was often guessed to be a decade or more younger. And even when his body began to fail, he remained a notorious flirt.

Now, after 92 eventful years, he is at peace. His legacy is plainly visible, in the faces of so many in this room. But Dad left us with a final mission in mind: To go find and hug his mother. To tell our brother-in-law Jack how we miss him. And to hold his wife Rose once more, to tell her he loves her and how he couldn’t wait to see her again.