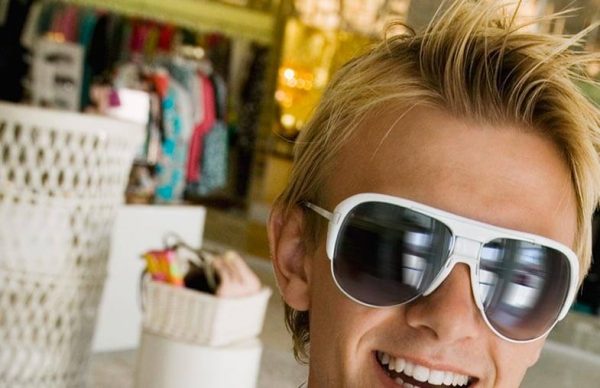 This article was originally published a few years ago as a guest column in the Edwardsville Intelligencer newspaper’s “Edge” weekend insert.

While out shopping with a female friend, we stop to examine a kiosk selling trendy purses and belts made entirely of big, dangly sequins in bold, fluorescent colors. I fear someone has accosted a figure skater and stolen their outfit for raw materials.

“I should get one of those,” my friend says, her face a canvas for disco-ball refractions cast by sparkling handbags. I raise an eyebrow. This young woman, characterized by her classy, subdued taste, must be in thrall, mesmerized by the magnificent gaudiness.

“Why?” I’m genuinely curious, and a little concerned.

“They’re so hot right now,” she replies. Her gaze doesn’t leave the display. “Everybody has one.”

“So? They’re popular, so what? You don’t even like pink. Or magenta. Or whatever that is,” I say, pointing to a belt roughly the shade of Liberace’s soul.

She finally looks at me, and her expression is blank. Yet, is it my imagination, or can I see hot pink sequins dancing in her irises? “They’re so hot right now,” she says again, flat, atonal.

“But you hate trend-driven consumerism!” I cry. “You oppose Paris Hilton and all she stands for. Why give in to this?”

She stares at me and points at my wrist, adorned with three thick, mono-hued rubber ringlets sporting unrelated slogans. I haven’t worn a bracelet since junior high. Why did I start again now? I’m struck by the realization that no one else has worn these things in months. Why am I?

Her finger raises to indicate my pseudo-vintage, process faded graphic T-shirt. It depicts a questionably-named business establishment that has likely never existed, in a state I’ve never visited.

I am overcome by my hypocrisy. My will to fight the system evaporates. I look from my friend’s face to the gleaming, serpentine scales of yellow, aqua and copper satchels. I revel in their gaudy hipness. They are to me as jewels in a treasure chest of fashion.

My friend buys one. I applaud her on how the fuschia complements her pea coat and brings out her hazel eyes. “You’re so in,” I tell her.

A week later, I’m at the mall with my wife. I’m drawn to a display of enormous belt-buckles, some with sharp, protruding edges, others with bright red LED lights scrolling popular catch phrases and rap lyrics. I have never liked such unnecessary belt attire. I imagine how stylishly ironic it would be to wear one now.

I gesture to a buckle resembling a hubcap, a dollar sign spinning in its center. “I like that one,” I hear myself say.

“You’re kidding, right?” my wife asks, incredulous. When I shake my head, her eyes go wide. “Seriously? Why?”

I stare at the spinning buckle bling and mentally compare it to a shiny, sequined pocketbook.