A Reflection on Dawson’s Creek 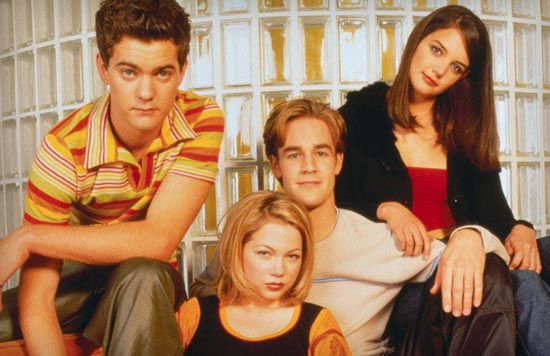 It was the spring semester of my sophomore year when my three roommates and I were turned on to the WB Network’s Buffy the Vampire Slayer. We were about a year late on the pickup, but hadn’t had cable in the dorm the year before, so I’d missed all of the 96-97 television season (except for a few episodes of The X-Files). So it’s the late winter of 1998 when a classmate lends us a bunch of VHS tapes filled with Buffy episodes, which we binge-watched (You could do that before Netflix?!? YES!) over a weekend with an apartment full of friends.

Immediately hooked, we decided that Tuesday nights would now be “Buffy night” at our on-campus apartment, a gathering point to watch new episodes in real-time. Our living room boasted a then extravagant 31” television (we called her “The Behemoth”), linked-up to a bitchin’ 90’s stereo for jury-rigged surround sound, ringed by three large, comfy couches. Our place was THE spot for group television viewing. So we made some mixed drinks, broke out the Boone’s Farm $2 “wine” (alcoholic kool-aid), and squeezed a small army of undergrads in to watch the mid-season return of the celebrated Slayer.

But this story isn’t about Buffy. It’s about Dawson’s Creek.

The network then known as the WB had tacked in a mid-season replacement high school drama after Joss Whedon’s buzzy lead-in. We’d seen the commercials, rolled our eyes, and dismissed the very idea. But as the B:TVS credits rolled, our viewing audience remained comfortable on the hand-me-down couches, sipping fruity elixirs concocted from cheap liquors. In no hurry, and with relatively few options for entertainment across our very limited cable subscription, we sat passive as the first minutes of Dawson’s Creek debuted.

Perhaps we were prepared to have some sport with the expected melodrama. We were well-versed in the ways of Mystery Science Theater 3000, primed for rapid-fire commentary and pop-culture witticisms. TV and film were a spectator sport for us, a competition to one-up each other with the most clever line, the most side-splitting send-up. So I expect we were locked and loaded for this much-hyped pilot, snark-phaser set to disintegrate.

Then Dawson’s Creeks’ titular protagonist arrived, Joey and Pacey in tow, the first minutes capturing the making of their little homemade horror film. And the room quieted down and absorbed the show with the occasional laugh, empathetic groan, and appreciative murmur every time Katie Holmes did that thing where she sinks her chin into her shoulder.

We filled the commercial breaks with quick bursts of chatter:
“Wait, this is pretty good?”
“That Pacey guy is hilarious.”
“Calling dibs on Joey now, screw you guys, you can’t have her.”
“Holy shit, it IS pretty good!”

And 60 minutes later, when the first episode wrapped, the entire room was hooked.

For the rest of the semester, Tuesday nights were Buffy/Dawson night, and we didn’t care who might think that was lame. We’d found two hours of television that felt made just for us (just like several million other viewers out in TV-land) and we relished it, made a ritual of it.

I remember people criticizing the dialogue of the show: “Nobody talks like that.” But my college friends did, and we had in high school as well. I’d run with a clever, eloquent bunch, equal parts wit and whimsy, and our conversations probably sounded a bit bizarre to the other muggles at our school. We were pop culture sponges and fiction devourers, fully loaded with catchphrases, quotes, and a zealot’s appreciation for lyrical vocabulary words.

Much as the first exposure to Kevin Smith’s Clerks and Mallrats has thrilled us, to hear our everyday conversations delivered on-screen in authentic language, Dawson’s Creek (and Buffy) tapped that nerve, that voice that felt both fresh and honest and undeniably familiar as well.

I was faithful for the first two seasons, meandered away during the third and completely lost interest by the fourth. But in those waning years, I introduced it to my then-girlfriend (now my wife). Though very skeptical at first, she grew to love it even more than me. She actually plowed through the entire series on DVD sometime later, right through the college years, and Pacey as a stockbroker, and whatever other strangeness followed.

When the show ended, though, we watch the final two episodes together in real-time broadcast. Even though I’d missed much of the continuity, the core four characters remained familiar to me (along with Jack, who I didn’t know as well but always enjoyed) and it felt good to come home to them.

The final episode, a flash-forward some years into the future, neatly ties up the series with a heart-wrenching death but also sweet (and seriously delayed) gratification. It’s a television treasure, an emotional tour-de-force, scripted with triumphant return by series creator Kevin Williamson. I remember watching the final credits roll, feeling emotionally exhausted but thoroughly satisfied. And, yes, I think they made all the right choices there at the end.

Why am I talking about this now? Blame it on a podcast.

One of my favorite podcasts, The Nerdist Writer’s Panel, recently released this roundtable discussion with Dawson’s Creek creator Kevin Williamson, and several writers from various seasons in the show’s run. As a writer and fan of television, the insight into the creation of the show and how it was produced is fascinating. As an appreciator of the program, hearing the insider view is delightful.

The panel was recorded before an enthusiastic live audience, which makes it even more fun, and the moderator and panelists take each other to task for the show’s weaker or more fan-controversial moments.

So, whether writer, fan, or both, you should go dive right in to this podcast, featuring Kevin Williamson (Scream; The Following), Jenny Bicks (The Big C; creator, Men In Trees), Paul Stupin (Switched at Birth), Rob Thomas (creator, Veronica Mars; co-creator, iZombie), Gina Fattore (Californication; Gilmore Girls), and Anna Fricke (creator, Being Human [US]). Moderated by Julie Plec (co-creator, The Vampire Diaries, The Originals, and Contagion).