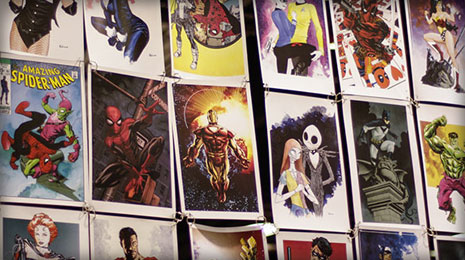 This article was originally posted at comic creator site Rocketbot, and later Nerd For A Living. Though the news stories that inspired it happened some time ago, I think the conversation is still very relevant for artists and creatives actively selling and exhibiting at conventions. Additionally, while this article is focused on comic artists, similar issues exist in the DIY and small business communities that function at conventions and online, a great many of whom are exploiting licensed properties in one fashion or another.

Back in 2012, comics news sites, blogs and forums had their collective heads on fire about Marvel’s legal dealings with Ghost Rider co-creator Gary Friedrich. The issue has been covered in-depth elsewhere, with plenty of opposing viewpoints and comment wars. But an interesting tangent has arisen from that story: the use of copyrighted characters and other trademarks in Artist Alley.

Most comic artists and conventioneers should be familiar with Artist Alley: at comic-oriented conventions, a section of the exhibition floor is reserved for artists – both pros and amateurs. They rent “booths” to sell prints, books, original art and other merch, interact with fans and take commissions for custom sketches. The Alley is a colorful place. Artists sit behind 4-to-8-foot tables piled high with their wares, hoping to attract attention and buyers with eye-catching banners. Up-and-comers attempt to spark conversations and engage sales. Popular professionals grow increasingly blurry-eyed as the weekend plows on, cranking out sketches while pounding caffeine, in anticipation of long nights in the hotel room catching up on their commission lists. It’s a place of excitement, commerce, camaraderie… and a certain degree of desperation. In short – it’s pretty awesome.

For many who make their entire living doing comic/genre-related art, Artist Alley represents an important segment of their income. A chance to offset the ever-increasing costs of being an artist. Maybe mollify their spouse’s budget-related anxiety attacks. When page rates are low and work scarce, a good weekend in Artist Alley might mean paying rent and avoiding a part-time job.

How is that money being made?

A good chunk of that revenue is generated using popular, ubiquitous and – most notably – trademarked characters from the world of comics, film, games and fiction. Fans clamor to see favorite characters reinterpreted by familiar pencils and fresh talents. Notable artists may receive requests for characters of their own creation, or ones to which they have been professionally associated. The rest, I’d wager, are drawing notable characters from the Big Two, other mainstream publishers, or other licensed properties – which they have no ties to, ownership of, or rights to use. And they are profiting from this usage (though profit on a rather small scale).

The comic book industry exists largely in a vacuum, playing by our own rules – and fast and loose even with those. We hold to our idiosyncratic traditions, even as we complain about them. Among them: the “blind eye” that publishers turn towards Artist Alley’s bustling commerce of non-licensed trademark exploitation. The dollars are generally too small, the usage too benevolent, to raise corporate eyebrows. Tradition says, as long as we avoid the rampant bootlegging of the hucksters, the Alley is healthy for our industry and its fans.

Now, though, the game may be changing. Currently, comics themselves don’t sell impressive numbers in the US. However, comics-spawned Intellectual Properties produce HUGE dollars in other venues. Movies, cartoons, toys, merchandising, MMORPGs – our “funny books” can be mined for serious cash. These opportunities lure bigger players – like Disney – into our sandbox. With decades of IP experience guiding their lawyer-y hands, they scoop our fragile sandcastles into their buckets.

These IP houses understand the real market value of those properties. They also know they must actively protect their trademarks in order to sustain them. They have no reason to care about our traditions. They have employees to pay, cable channels to run, shareholders to service. Intellectual property fuels those great corporate engines.

The moment they perceive Artist Alley as a threat to their trademarks and profit margins, they will lawyer up and hand out cease-and-desists like Halloween candy.

Now, before railing against the “big bad corporation”, consider this: any person or company who holds a copyright, trademark or intellectual property must protect that ownership. If they do not actively defend their trademarks with legal action when other groups or individuals exploit them without permission, they set a precedent of neglect. Their ownership may not stand up in court and could be compromised. And that would mean money lost. The more valuable the property, the more zealously that ownership must be guarded. That guardianship can require astronomical dollars to sustain, as claims small and large nickel-and-benjamin away at corporate profits. (Again, see the Gary Friedrich case.)

What does that mean for you, the Artist in the Alley?

As DC Comics pro Sean Gordon Murphy blogged, it means awareness that you are putting yourself at risk every time you produce work with a character you don’t own:

You’d better memorize the following statement, because this is essentially what you’re saying: I call it the Artist Alley Accession…

“I understand that sketches/prints/sketch books are in a legal gray area, but I’m going to continue doing them in hopes that the rightful owners of the characters decide to continue looking the other way. The long-standing tradition of convention drawings, and the fact that almost everyone in comics is doing this, IN NO WAY protects me from legal action that a corporation might one day take. If that day comes, I’ll pay the price. But for now I’m hoping I’ll get away with it because I feel it would be silly for a corporation to ruin the fun of convention sketching.”

Marvel’s Joe Quesada and Dan Buckley provided vague but somewhat encouraging response to this in an interview. But there’s no protection in those statements. Any pub’s corporate legal team could change their collective mind and unleash hell on the artistic offenders, any time. Check out Murphy’s experience with Marvel and his made-for-funsies Wolverine ABCs book. They didn’t just want to stop him from producing and selling it – they wanted to own it and use it at their discretion, without remuneration to the artist. Yikes.

So what do we do about this?

The safest way to handle this is pretty obvious – don’t draw, print or sell anything with characters you don’t own. Easy, right? Except the demand in Artist Alley is predominately for those very products. You would undeniably be losing money and potential fans, while the less scrupulous artists collect the dollars. The moral and legal high ground gets less attractive when it erodes your bottom line.

The Artist Alley culture is part of what makes the comic community great. We should endeavor to protect it. Publishers/corporations/licensors should have open and understandable legal policies regarding these kinds of usage, which both protects their business and profits, and their relationships with fandom and the creative professionals they would seek to employ.

We need a coalition of publishers, corporations and creators that can draw up, present and maintain a common set of rules for industry adoption. Produce a website housing clearly defined free usage rules, and carefully articulated limitations. Widely disseminate that information. Require convention organizers to distribute this info to the artists purchasing booth space. Remove the gray area and protect every level of the industry – companies, pros, amateurs – even the fans, who are sometimes duped into buying unauthorized merchandise thinking it legit.

1. Artists should be allowed to do one-off convention sketches and commissions for sale – at their self-designated price point – without legal interference from the copyright holders, as long as they:

After all, the comics industry as a whole NEEDS working artists – and commissions keep artists working (and fed, and clothed, etc…)

2. Artists should be able to obtain a standard waiver from property owners/licensors. This waiver would allow them to create limited edition fan-art or self-promotion prints and sketchbooks which include the licensed property, with these restrictions:

It’s healthy for our industry to aid upcoming/working creative talent as long as substantial dollars – meaning significant market share of sold goods – are not taken from the owner of the property. A hundred bucks worth of 8×10 Batman pinups wouldn’t impact DC’s budget line. But move a thousand full-size posters and you’re heisting market share.

3. Have a general plan for situations where the unlicensed product creates such demand that it would exceed the parameters of the waiver. Taking cue from the situation with Sean Gordon Murphy’s much-requested Wolverine ABCs, there’s got to be a way for companies to amicably arrange licensing and mutual profit from these works. The artist residual might be relatively low, but it’s better than no dollars, and it could be the break into professional work, or new contracts.

Look at Les McClaine’s terrific (and freakin’ enormous) “Mayhem at the Manor” poster. I believe this is unlicensed work. He only sold 250 prints (which is still enough it could have landed him in issues with DC). I’d imagine there would be a significant market for this – it’s too cute, clever and stunningly rendered to not sell like bat-cakes. (DC – there’s money to be made here – make this happen!)

I’m sure the legal version of those ideas above would be a good deal more complicated and limited – I’m no lawyer – but it seems fair. Murphy has also called for a waiver system to protect both artists and owners. However, with the Friedrich issue still in the “hot mess” litigation stage, and the community having a collective twist in their undies about the whole thing, it may be awhile before we see the big publishers establish any significant stance or policy.